Kaliningrad (former Królewiec, Königsberg) is a capital of Kaliningrad Oblast – the Russian enclave bordering on Poland and Lithuania, with the population of 430,000 people. In the years 1544–1945 it used to be a university town, with world-famous Immanuel Kant as one of its most renowned graduates and professors. Today Kaliningrad is an important fishing and trade harbour, connected via a deepened, 40-kilometre long waterway with the Baltic Sea and the anteport Baltiysk (the headquarters of the war fleet).The city is a rail hub, it has the airport and in 1996 it was designated a Special Economic Zone. Nowadays, Kaliningrad’s major industries are: rail track manufacturing, shipping, fishing, cellulose-paper manufacturing and electronics. It is famous for industrial-scale extraction of amber. 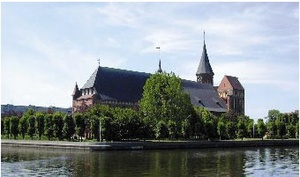 • A partner agreement between Kaliningrad and Olsztyn was signed already in the 1970s. Until 1980 the cities cooperated in many fields, then, there was a more than 10-year-long break in contacts. They were resumed in 1993, when a 5-year-long twinning agreement was signed, prolonged in 1998 and 2003. The revival of contacts was also due to political changes that took place in Russia, among others, a decision of 1991 about the liquidation of the closed zone (a so called “war zone”) Kalingrad Oblast used to be sine 1945. At the same time the region and its capital – Kaliningrad – opened to international cooperation.

• In the years 1995–2002 in both partner cities representatives of the mayor and the city president were active. They were helping, above others, with cooperation between self-government officials, teachers and pedagogues (inter-school exchange programs), with organization of sporting and cultural events such as photography or stamp exhibitions. They supported the organisations of local businessmen in maintaining contacts and conveying economic information. The President of Olsztyn sponsored all the Olsztyn fairs and promoted them in Kaliningrad. In 2002 he was the initiator of an agreement between Kaliningrad and Communes Association “Polish Gothic Castles”, he was presiding. The agreement aims at the extension of the tourist route of the Polish Gothic Castles up to the territory of the Kaliningrad Oblast.

• Another document prolonging a twinning agreement was signed in June 2008. This time it took a form of a permanent agreement with the possibility of its termination by any of the partners. The sister cities were obliged to support economic initiatives of companies and trader associations, cooperate at carrying out and implementing European projects, foster school and youth exchanges, support exchange of cultural representatives, ensembles and artists, help with the organisation of sporting events as well as take part in official ceremonies taking place in the two cities. Kaliningrad and Olsztyn are also academic centres with universities, higher schools and scientific institutes. The University of Warmia and Mazuria as well as private higher schools of Olsztyn continue cooperation with some of 21 higher schools of Kaliningrad. Close cooperation and intensive contacts with Kaliningrad were declared priorities according to “The Strategy of a Development of Olsztyn in the Years 2006–2020”.