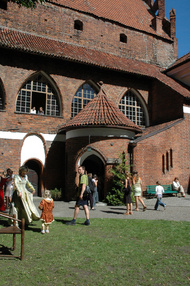 (2 Zamkowa St.). The Olsztyn castle was built in the Gothic style in the 14th century. At present it houses the Museum of Warmia and Mazury. In its primary function the castle was the seat of the administrator of the landed property of the Warmia Chapter. The most famous administrator, performing these duties in the years 1516–1521, was Nicholas Copernicus. The former refectory with a subtle crystal vault dating from about 1520 is the largest castle hall. The castle, built in the years 1346–1353, originally consisted of one wing on the north-east side of the rectangular yard. The access to the castle, surrounded by a belt ofdefensive walls and a moat, led through a drawbridge from the Łyna side. The south-west wingof the castle was built in the 15th century. The 40-metre tower from the middle of the 14th century, located in the western corner of the yard, was rebuilt at the beginning of the 16th century and given a round shape on a rectangular base. At the same time, the castle defensive walls were raised up to 12 m and complemented with another belt of lower walls, additionally strengthened with towers. The castle wallsystem was partially connected withthe municipal walls, which made the castle a bastion protruding beyond thetown and preventing access to it. The castle belonged to the Warmia Chapter, which, together withthe Warmia bishop was under the military protection of the Teutonic Order till 1454. For this reason the castle played animportant role during Polish-Teutonic wars. In 1410, after the Battle of Tannenberg, it surrendered without fight to the Poles. In 1414, Polish troops captured it after a siege of several days. During the thirteen years’ war (1454–1466) it changed hands. Teutonic Knights threatened the castle and town once more in 1521, when Nicholas Copernicus was the administrator of the Olsztyn district. Copernicus prepared Olsztyn for the defence against the expected enemy attack so effectively that neither the town nor the the castle itself suffered significan tloss during the last Polish-Teutonic war.

In the 16th century, two Warmia bishops and great writers: Jan Dantyszek – ”the first Sarmatian poet”, and Marcin Kromer stayed in Olsztyn castle. During his visit, Kromer consecrated St. Ann’s Chapel, built in the south-west wing of the castle and embellished with delicate lamella vault.

In course of time, both wings lost their military importance and became of little convenience for dwelling purposes. Therefore, a drive was led to the castle from the town, and a palace wing was built on this side in 1758, while the borough and part of the walls were liquidated. Ignacy Krasicki stayed here in 1779. After the annexation of Warmia (1772), the castle devolved to the management of state estates. In 1845, the bridge over the moat was replaced by a dam connecting the castle with the town, and the moat was dried. In the years 1901–1911, a majorre pair of the castle was carried out, which involved changes in many fragments of this monument of history including a change in the level of floors and the putting in of window-frames int he gallery. A museum was located in the castle rooms in 1921. In 1945, the castle became the seat of the Mazurian Museum, which is called The Museum of Warmia and Mazury today. Apart from exhibition activity, events organized here within the framework of the Olsztyn Artistic Summer (OLA), such as castle nights and „Summers at the Museum” are highly popular.

There is a permanent Copernicus exhibition (located in two spaces: in the gallery and in the room which was once a private apartment of the administrator) in the castle. There is an astronomical plaque for equinox studies from 1517 on the gallery wall made by Nicholas Copernicus with his own hands.