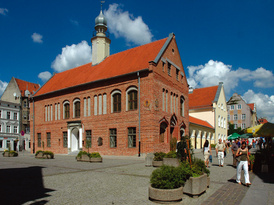 (33 Stare Miasto Street). Located in the heart of the Old Town, the Old Town Hall was built in the second half of the 14th century just after Olsztyn received municipal rights. It housed the offices of the town authorities until 1915. Initially the building consisted of one wing situated on the south-west side of the Market-place. In 1620 it was burn tlike most of the town. Four years later it was rebuilt. The authorities of the town occupied the first floor of the building while the ground floor and the cellars were used for commercial purposes. During the remodelling of the town hall, a tower used as a guardroom was added. In the second half of the 18th century a major repair was carried out. Selling outlets disappeared from the Old Town Hall in 1880. In the place of a former brewery a third, north-east wing of the building (the second, north-west one was built in the middle of the 18th century) was erected between the two World Wars. In 1945, the Old Town Hall was burnt for the second time. It was reconstructed in the years 1946–1949. The townh all building underwent a major repair in 2003 on the occasion of the 650th anniversary of the town. A decision on the restoration of the turret was made at that time. During the work, original Gothic elements including the so called ”donkey’s backs” characteristic of late Gothic, were discovered under the plaster layer in the southern part of the building.

The sundials, placed on the outer walls of the building, are an unquestionable tourist attraction. At present, the Old Town Hall building houses the Provincial Public Library.