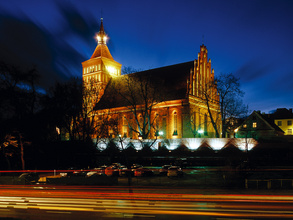 St. Jacobs Church was built in the 2nd half of the 14th century. The partially wooden part of the church tower was replaced with a new one in 1596. It is maintained, as the whole church, in the Gothic style. It is 63 metres high. The side chapels of the church were reconstructed in 1721 by Piotr Olchowski of Reszel. In 1864 the shrine threatened to collapse and it had to be closed. After a major repair in the years 1866–1868 it was put to use, but the work on the complete interior restoration continued for several years. A fire, which caused a lot of loss, broke out in the church in 1896. Sermons int he church were given in Polish from at least 1565. Over the centuries, the church was visited by eminent Poles: Jan Dantyszek, Marcin Kromer and Ignacy Krasicki – all three holding the post of Warmia bishops, and King Władysław IV (in 1635). Feliks Nowowiejski, the composer of ”Rota” and ”Legenda Bałtyku”, worked as the organist there in the years 1898-1900. The church had the rank of pro-cathedral from 1945, con-cathedral from 1973, and it has been a basilica minor since 2004. Olsztyn Organ Concerts are held there in summer.

In 1807, during the Napoleonic wars, the French kept 1500 Russian prisoners of war in it, who, protecting themselves against the cold, burnt a considerable part of the wooden furnishing of the shrine. However, some of the church’s movable monuments of art have remained: Gothic ones (including a wall tabernacle with a Gothic grating and a late-Gothic triptych); Renaissance ones (including painted decoration of the wall tabernacle, St. Cross triptych and chandeliers); Baroque (including statues of apostles St. Andrew and St. Jacob Senior, and a crucifix of supranatural size, a picture of Our Lady of the Rosary, a baptismal font).