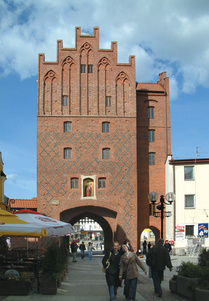 (Upper Gate) and defensive walls (1 Staromiejska Street). The Upper Gate (German: Obertor, Hochtor – Upper Gate, High Gate) called the High Gate since the 19th century, was built in the 14th century. It is the only remaining gate of three which existed in the defensive walls surrounding the town. Large fragments of the walls near St. Jacob’s Church, at Asnyka and Okopowa Streets and near the castle have also been preserved from the mediaeval retrenchment. The gate is situated in the north-east part of the Old Town complex, on the axis of the outlet of the high road.

In 1788, the High Road was repaired and adapted for the purposes of an armoury of the dragoon squadron, in 1858 it was rebuilt into a prison, and in 1898 it was turned over to the town police station. A lot of modifications were done in it (among other things, a different shape was given to window holes and the gable of the structure and a passage for pedestrians was broken through). In 1863, Wojciech Kętrzyński, accused of gun-running for the January Uprising, was held under arrest here.

The gate has four storeys with a little floor forming a kind of thef ifth storey in the gamble area. The gate has a ridge roof. The Gate was restored in 2003. The effigy of Our Lady Queen of Peace, presented to Olsztyn by John Paul II was placed in the niche facing the Old Town. This work was made in the glass mosaic technique in one of Rome’s studios. A red bronze effigy of John Paul II, consecrated on the first anniversary of his death, is also placed on the walls of the High Gate.