Within the city there are eight large lakes and several smaller ones – in total, as many as 11 water bodies of the total area of over 700 hectares. Apart from them we can see smaller ponds in Olsztyn. Talking about the lakes situated within the city boundaries, we must not forget about those located very near its boundaries – lakes Wadąg, Klebarskie, Linowskie, Bartąg and Wulpińskie. Olsztyn lakes, though located in a relatively small area, are characterized by a large variety both in size, origin, formation of the shoreline and occurring fauna and flora. We meet numerous species of plants and birds here. We will see swans, cranes, herons, cormorants and ducks. Olsztyn bodies of water are rich in fish, which makes them popular with anglers. Lake Ukiel has a well-organized beach and developed infrastructure, which attracts holidaymakers in summer. Lake Kortowskie adjoining the academic campus of the University of Warmia and Mazury, and afforested in a large part shores of Lake Skanda have good conditions for bathing, sunbathing and doing water sports.

Lake Ukiel (Krzywe) (area: 412 ha, depth: 43 m) is the largest and deepest lake in Olsztyn. It is located in the north-west part of the city between the residential quarters of Dajtki, Gutkowo and Likusy. The shoreline of this picturesque water body is 22.5 km long, creating a lot of bays and peninsulas, the largest of which is Ostrów. The littoral zone is overgrown with reed, calamus and bulrush. The most interesting plant species include Canadian water-thyme and hornwort. Ducks, grebes and coots nest in the quiet places of the lake. Black-headed gulls, tufted ducks, great reed warblers, wagtails and nightingales nest in the nearby flood waters of the River Kortówka (between the lake and the railway track in the direction of Warsaw). Holiday centres, restaurants, marinas and the city beach are all situated on the lake. The beach, protected by lifeguards throughout the season, is the most popular one in Olsztyn. 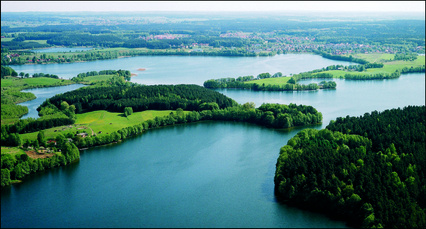 Lake Długie (area: 27 ha, depth: 17.2 m) is located in the west part of Olsztyn. According to its name the lake has a prolate shape and spreads over the length of over 1.5 kilometers. There is the above-mentioned peatbog nature reserve Mszar located to the east from the northern bay. A lovely walking route, at which there are benches and picnic facilities, runs along the shores of the lake, which is situated in its large part in a forest. In its narrowest part the shores of the lake are connected by a wooden bridge, unofficially called the Bridge of Lovers. The lake has gone through a period of intensive revitalization carried out by scientists from the University of Warmia and Mazury. It is also being systematically stocked with fish.

Lake Kortowskie (area: 95.5 ha, depth 17 m) is one of the largest natural attractions of Kortowo, the campus of the University of Warmia and Mazury. Small midforest streams: Potok Leśny and Potok Starodworski and a small the Kortówka River flow into it. There is a beach on the lake on the side of Kortowo. In many places the shores of the lake meet the forest. There is a marina on the lake, at which a water equipment hiring establishment and a restaurant provide their services.

Lake Skanda (area: 52 ha, max. depth: 12 m) is on the outskirts of Olsztyn in the vicinity of Osiedle Mazurskie residential quarter. It can be seen when leaving Olsztyn in the direction of Szczytno. There is quite a big island with a total area of about 13 ares on the lake. The lake has a shoreline varied with numerous bays – two of the bigger ones are on the west and east shore of this reservoir. Just like some other Olsztyn lakes, Skanda in its large part is surrounded by a forest. A large sandy beach on its shore and a nearby sandy and steep precipice form a lovely place for a rest. It is possible to walk along a path along almost the whole reservoir. Anglers like this lake because of specimens which they can catch there – particularly big tench, bream, and pike.

Lake Track or Trackie (length: 1.5 km, width: 0,5 km) covering 53 ha is situated near Zielona Górka residential quarter at the north-east end of the city. Its biggest depth is less than 5 m. It is a hydrologically closed lake, which was created as a result of overflooding meadows by water from melioration water intakes. It has a prolate shape with a semicircular bay in the middle of the north-east shore and seasonally overflooded island. Due to its size and a small depth, Lake Trackie is the fastest freezing lake in the vicinity of Olsztyn. This is why it is extermely popular with ice boat sailors. 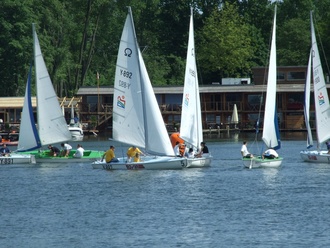 Lake Podkówka (area: 7 ha) is located near Likusy residential quarter. The name of this small lake, almost completely surrounded by trees, comes from its shape resembling a horseshoe. This lake is also called Kopytko or Siginek. It has no water connections. It is highly appreciated by anglers and strollers.

Lake Redykajny (area: 30 ha, depth 21m) is located in the north part of Olsztyn, near Gutkowo. The lake covers around 30 ha, and its maximum depth is less than 21 m. It is abundant in fish. The shores of the lake are afforested, in same places high and steep.

Lake Sukiel (area: 21 ha, depth 25 m) is situated at Likusy residential quarter. The length of the lake – 0.7 km, width – 0.4 km. This reservoir is surrounded by buildings in the north-east and waste land and forests in thesouth. This reservoir is also highly appreciated by anglers.

Lake Tyrsko also known as Żbik, Gutkowskie (area: 19.5 ha, depth: 30.4 m) is situated between the residential quarters of Gutkowo and Likusy. The lake has no surface tributaries or runoffs, it is prolate in the east-west direction. The reservoiris relatively deep. The lake is characterized by high and fairly steep banks, which are only a little easier on the east side. Part of the lakeside has been transformed into recreation grounds. Between the years 1957–1987 it was a nature reserve.

Lake Starodworskie is a small (area: 6 ha, depth: 23.3 m),but very interesting lake. Owing to its location in the area of the University of Warmia and Mazury, for years it has been an experimental water body in which research on novatory lake recultivation methods used, for example, for the revitalization of Lake Długie, are conducted. Near the lakeshore there is the horse stud of the Kortowo club as well as benches and a strolling path.

Lake Czarne is a very small lake (area: 1.5 ha), near the City Beach on Lake Ukiel. In the 70s an investment aimed at purifying nearby Lake Długie was started here. The recultivation consisted in its flushing. For this purpose, Lake Czarne was connected with Lake Krzywe by an open canal and with Lake Długieby a canal running under Bałtycka Street. 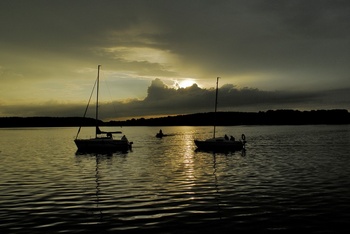