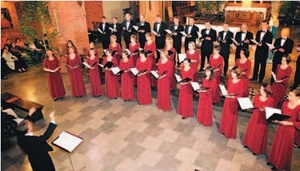 It was founded in 1952 on the initiative of Professor Wiktor Wawrzyczek. Within over half a century of continuous artistic activity, they have given about 1600 concerts. Their repertoire comprises mainly a cappella songs of Polish and foreign composers, including early and contemporary classical music, rock hits, Polish and foreign folk music arrangements, Christmas carols and pastorales from various regions of Poland and the world. With cooperation of outstanding soloists and orchestras the ensemble performs also great vocal-instrumental works winning numerous awards and prestigious prizes.

The choir has been performing continuously since December 1977 at Municipal Culture Centre in Olsztyn. Since 1985 it has been conducted by Janusz Wiliński. The organisation of the ensemble is based on the model of 17th century music associations which gathered amateurs as well as professional musicians. Their true fascination with singing resulted in numerous festival presentations and prizes at renowned Polish and foreign festivals or radio and television recordings. They performed over a dozen of oratorio-cantata works and gave numerous concerts in Finland, Sweden, Germany, Austria, Switzerland, Bulgaria, Russia, Hungary, the United States, Great Britain and France, getting very good reviews. 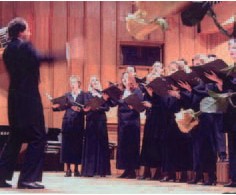 It is a vocal ensemble of doctors, founded in 1992, when a group of friends and music lovers decided to meet regularly and practice singing with a conductor and their present artistic director – Bogusław Paliński. Their repertoire comprises Renaissance, Baroque as well as contemporary music. Apart from regular concerts of chamber music they have taken part in a premiere of Oratorio by Feliks Nowowiejski “Powrót syna marnotrawnego”, and together with Olsztyn Philharmonic Orchestra and Medical Choir from Szczecin they performed “Requiem d-moll” by W. A. Mozart and “Messa di Gloria” by G. Puccini. 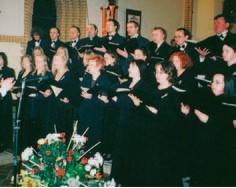 Academic Choir of Higher School of Informatics and Economy TWP was founded in 1996 by its present conductor Jan Połowianiuk. Their repertoire comprises traditional sacred and secular choir works, predominantly a cappella, ranging from medieval Gregorian chant through Renaissance motets and madrigals, songs of Baroque, Classical and Romantic pieces to contemporary composers. They also perform masterpieces of vocal-instrumental music, including Polish premiere of “Liturgia Św. Jana Złotoustego op. 41” by Piotr Czajkowski at an opening concert of International Festival of Orthodox Music in Hajnówka in 2005. 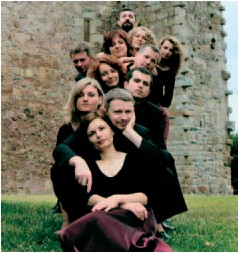 It was created in 2000 under the patronage of Museum of Warmia and Mazuria. They have in their repertoire Renaissance, Baroque and contemporary music inspired by early music or folklore, as well as more popular forms: spirituals, popular standards in a cappella arrangements, carols and pastorales. The ensemble may be recognized by their unique style, sublime sound and expressive interpretations full of joy derived from singing. A 16–people group gives numerous concerts at festivals, taking part in competitions in Poland and abroad. Its greatest achievement was winning twice (in 2001 and 2002) the Main Prize of “Golden Lute of Jerzy Liban” at All-Polish Choir Tournament “LEGNICA CANTAT”. The high level of the choir was proved by granting them the
prize for the greatest sound quality, for the best performance of a religious piece, while Marcin Wawruk was awarded the prize for the best tournament conductor.