Would it be possible to go back in time to the year 1542 and tell Nicolaus Copernicus about the research which proved his model of the world structure, presenting him modern scientific picture of the Universe, much more complex than the one we know from his work “On the Revolutions of the Celestial Spheres”? Such miracles can happen in Olsztyn thanks to the Planetarium, a monument being a tribute to that outstanding astronomer. 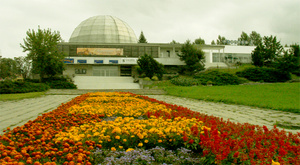 On 19 February 1973 – on the 500th anniversaryof the birth of Nicolaus Copernicus – a ceremonial opening of Olsztyn Planetarium, designed by LudomirGosławski, took place. A colourful 205-tile composition on the east wall ofa trium as well as the portrait of NicolausCopernicus decorating the hall were commissionedby a plastician Stefan Knappfrom London. In the hall, there is also awall painting by Zygmunt Droński, depictingthe Horsehead Nebula, a darknebula in the Orion constellation.

Main forms of Planetarium’s activity are astronomy programs attendedeach year by a few thousands of spectators. The starry sky presentedduring the shows as well as interesting astronomical phenomenaprovide long – lasting memories. In addition, primary and secondarystudents are offered didactic presentations and other educationalprojects launched by the Planetarium. There is also a specialist library,comprising a few thousands of books and a few hundreds mainlyastronomic and astronautic periodicals. People hooked on astronomymay attend lectures of specialists active in Polish centres for scientificresearch. 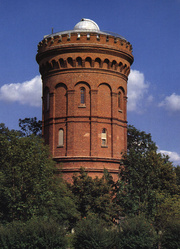 The Moon, Sun, planets and planetoids, star clusters, nebulae, galaxiesand comets may be observed every day in Olsztyn AstronomicalObservatory, while its terrace offers a superb city panorama. If the skyis clear, ‘sky shows’ take place, while cloudless evenings and nightsuncover mysteries of the starry sky. With the use of a telescope youmay observe immense richness of craters and mountains on the Moon,spot the difference between planets and stars, view four brightest Jupiter’s moons and Saturn’s rings. As for distant universe objects, theObservatory presents multiple systems and star clusters, bright nebulaeand galaxies. On a sunny day you can also examine the Sun with thetelescope tracking the sunspots, which is a great attraction. In hobbycircles the youth has a chance to broaden their knowledge, get to knowastronomical devices and instruments, conduct observations of variablestars or track sunspots.