It has all started with the Music Society which later developed into the orchestra. In 1962 Olsztyn National Philharmonic Orchestra adopted the name of Feliks Nowowiejski, an outstanding composer of Warmian origin. It marked a significant development in the history of the orchestra as they occupied a remarkable position among institutions propagating national culture. After eleven years the orchestra was transformed into Feliks Nowowiejski National Philharmonic and since 2005 it has been operating under its present name. 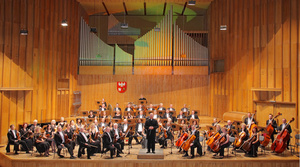 Its concert hall has witnessed numerous Polish and world premieres and performances of outstanding artists. The Philharmonic stage serves also
as a place of promoting talented young musicians. The audience enjoys music festivals, periodic concerts and musical mornings. The Philharmonic carries out a lot of educational projects for children, youth and students, including kindergarten concerts, school concerts of chamber music and university performances, often in cooperation with other Olsztyn choirs. The philharmonics have successfully performed in Poland and abroad, making numerous recordings. In the nearest future the new Philharmonic hall is planned.