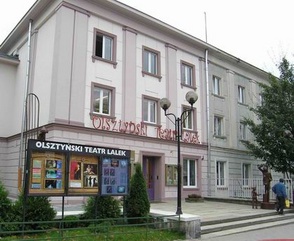 It was founded in November 1953 on the initiative of Association of “Czer wony Kapturek” Puppet Theatre of Warmia and Mazuria. The Theatre has, however, a long-established tradition, being a successor of the pre-war “Bajka” Theatre, created by ten teachers of Polish schools and kindergartens of the Warmian region. Since 1986 it has been operating under the name Olsztyn Puppet Theatre. Within 50 years of its activity the Theatre has staged over 200 premieres for children, youth and adults. Since 2000, the latter do not need an excuse to visit the theatre as an official Adults’ Stage came into being. The Theatre appears at all major theatre festivals in Poland and abroad and holds such annual events as Student Theatre Week and ANIMA Olsztyn Week of Puppet Theatres. In addition, it runs numerous educational projects and co-operates with local schools, the result of which is a School Theatre Council, associating primary and secondary students, and the Theatre Newspaper of Olsztyn Puppet Theatre. The plays are also followed with theatre lessons, discussions and meetings with renowned artists. You should also notice the stage set – brilliant costumes, high
quality elements of scenography and posters. 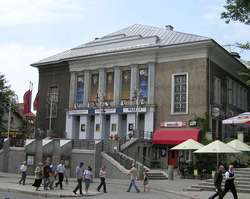 It was erected in 1925 on the site of a large villa in Italian style, to the project of August Federsen, as a gift for the local community in thanks for the won plebiscite. The building survived the war almost intact and on 18 November 1945 the Polish stage was inaugurated with the premiere of “Mrs Dulska’s Morality”. Theatrical activity is not limited to the four stages: the main one, where classics, modern dramaturgy and plays for children and the youth are performed, the rear one, focused on modern literature, Margin Stage created by the youth for the youth and a stage in the Teatralna Café, where “Przy Stoliku Theatre” stages its premieres. In addition, the theatre hosts some theatre festivals, carries out didactic projects of regional scope and takes part in exchange programmes. The centre of educational activity is Aleksander Sewruk Post-Secondary Acting School, which in July 1998 obtained a status of a public school, offering a threeyear Bachelor of Arts degree. Moreover, the Theatre, which has so far produced 600 premieres, undertakes such initiatives as: Drama in Action, Literary Perforations, Didascalia, or “Goniec Teatralny”, while large foyer exhibition space invites to vernissages of painting, graphics, drawing, posters or archival records. The Theatre hosts also two renowned festivals – Olsztyn Theatre Meetings and DEMOLUDY International Summer Theatre Festival – contributing significantly to cultural growth of the city.