The ensemble was created in Olsztyn, in September 1992, by Leszek Szarzyński, a renowned flute virtuoso, and a group of outstanding artists – soloists of symphonic orchestras and professors of Music Academies. Its vast repertoire covers music of different epochs, with special focus on Baroque and Early Classical music, though contemporary composers, writing pieces especially for the ensemble, are also represented, among them: Marcin Błażewicz, Marian Sawa, Marek Sewen, Bernard Chmielarz, Marek Czerniewicz or Tadeusz Kossak. The ensemble operates under the patronage of the Museum of Warmia and Mazuria in Olsztyn. Since the very beginning, they perform periodic “Summer Concerts” in the most popular and attractive towns of the region of Warmia and Mazuria. Moreover, in 1996 they launched the initiative of monthly chamber concerts “Cavata at Olsztyn castle”. They have also toured Austria, Germany, Hungary, Lithuania, Sweden and France. The ensemble, as well as its individual musicians, have made numerous recordings for the Polish Radio and Television. 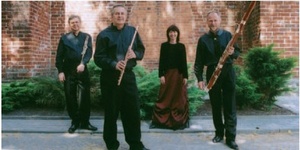